A couple weeks ago at MicroConf a friend asked “So, what are you working on these days?”

I gave him a blank stare. How could he not know? All I've talked about is ConvertKit. That's been my entire focus. All my time and money has been poured into building and growing the best email marketing platform.

Our entire team is hard at work answering support requests, fixing bugs, talking to customers, and building new features. But all of that is easy to do quietly. We're working our asses off, but if we aren't vocal about it our customers and potential market have no idea about any of it.

I've written posts about our $50,000 investment and reaching $5,000 in MRR, but other than that we've been pretty quiet. If you want to see our metrics, those are totally public as well, but many people don't know that either.

That conversation at MicroConf was just a good reminder that we need to be working hard in public. When you're trying to grow, just doing the work isn't enough.

So this is the first of many monthly reports. We'll do a check-in on our key metrics, share the new features we've launched in the last month, and feature a few of our awesome customers – all in the spirit of working in public.

That puts us at an annual run rate of $83,869. Fast approaching that six-figure mark.

Anyone who has been following our metrics for the last couple months noticed that our churn was very high. For a couple months it was hovering right around 20% each month. That kind of churn cripples growth.

In a call with Josh from Baremetrics he said to focus everything on getting that down (they just dropped their churn rate significantly).

I knew that as we focused on higher quality customers churn would decrease. Almost all of the accounts churning were high-quality accounts that we picked up during our experiment marketing to authors. Our new experiment of focusing on professional blogging customers seems to be much better fit for the service (though we'll need more time to know for sure).

The numbers are still terribly high, but the trend is looking good. Give it a few more months and we should have churn under control.

Another fun metric is that we're now over the 100 active customers mark.

After publishing our metrics a few months ago I started to get emails implying that since we're over $5,000 in MRR we're basically rolling in spare cash. Not exactly.

While $5k is nice for a small one-man show, that's not what ConvertKit is anymore. We are a team of four with pretty serious infrastructure costs.

The difference is being covered by my $50,000 investment from back in January. Our goal is to hit break even (which I predict will be around $15,000 per month) before that investment runs out.

When designing ConvertKit I'd always focused on great usability. That means accomplishing tasks in the quickest, most intuitive way possible is always the priority. Unfortunately with limited time that meant the user interface lacked polish and looked a bit dated. In fact, the overall look and feel of ConvertKit was the same a month ago as it was two years earlier when we started.

Last month I finally set aside the time to focus on the user interface. A small redesign was definitely in order. 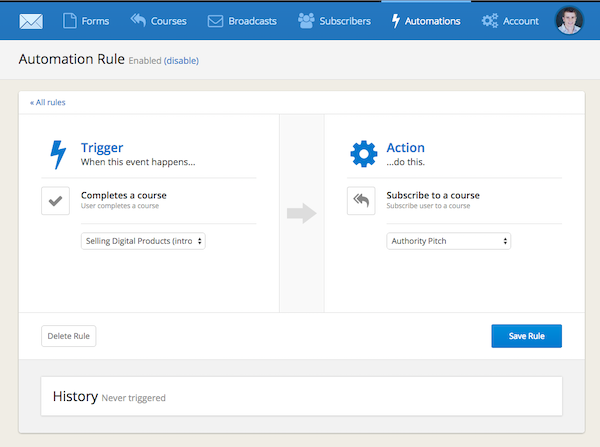 I didn't go crazy—after all we still need to focus on functionality and usability above all else—but the app looks a lot more modern.

As part of the redesign we upgraded to the most recent version of Bootstrap. At first when I made the switch I panicked for a minute: everything was broken. But once I went through the docs and swapped out the classes that had changed, things started to look better.

The majority of the layout issues came from a switch in the box-model from content-box to border-box. Basically the box model refers to how a browser determines the width of an element:

Let's take a look at a quick CSS example:

So that's why a simple change can break everything. Luckily it's pretty easy to fix and border-box really is the better way to go long-term. Here's an example of the type of bugs I fixed (from the old account creation page): 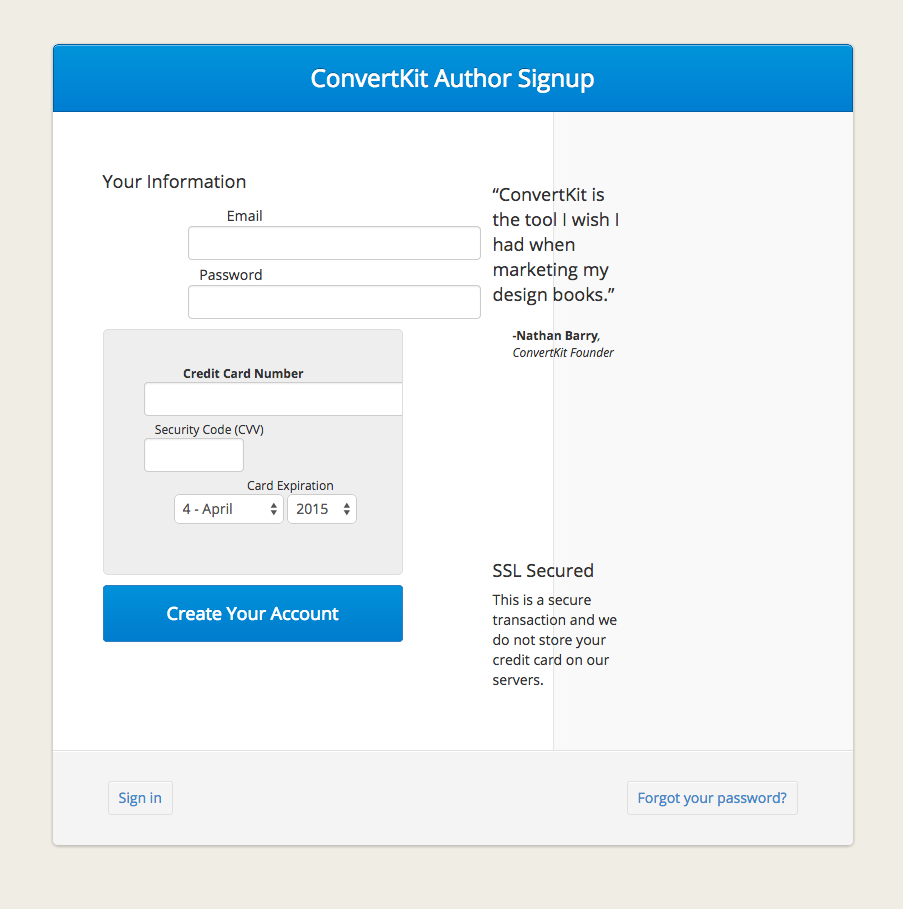 With that Bootstrap upgrade out of the way we're in a better position to keep developing and improving the UI.

In ConvertKit subscribers have always been linked to a specific form or course. Instead of rigid lists like most email providers ConvertKit is far more flexible. You effectively tag subscribers with what they've engaged with and then can save segments for later.

The downside is that to view your subscribers you had to look at each form specifically. Meaning if you didn't know which form a subscriber came from it was really hard to find them.

Just a week or two ago we launched a brand new All Subscribers page. You can now view and search all subscribers in one place. 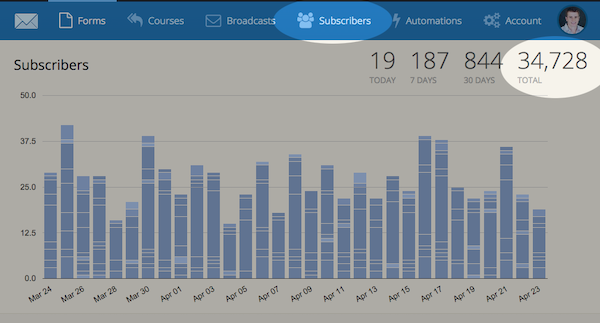 Stop wasting real-estate on your site

Most blogs are focused heavily on gathering email subscribers. But what happens after someone subscribes? Your site is now filled with calls to action for an action they've already taken. In other words, almost every blogger around is wasting valuable real-estate.

Now in ConvertKit you can swap out the forms that a visitor has already subscribed to for other content.

As part of the overall redesign I wanted to do something to give people a great experience when they first sign up.

For the redesign I decided to go with a card-style design. Fill out your account info on one side, then flip it over to enter your credit card details.

Here's a screenshot of the new process: 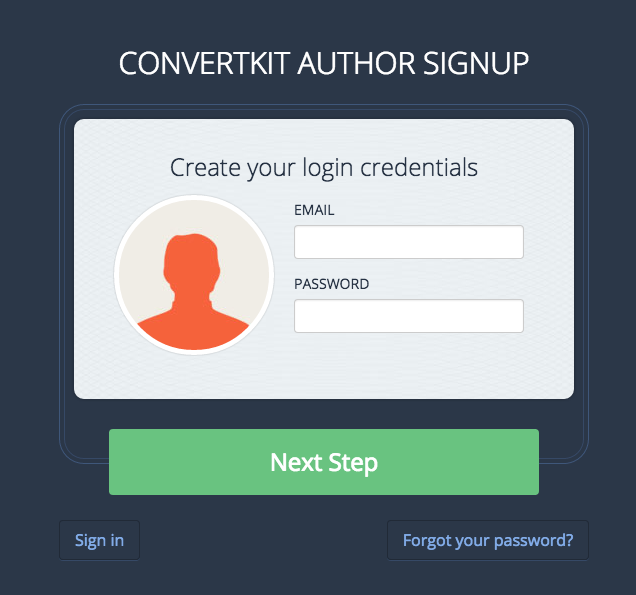 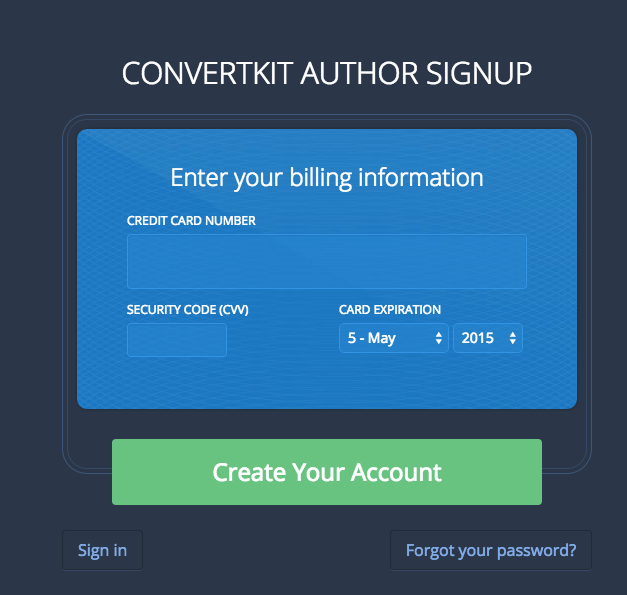 Direct sales has still been our biggest driver of new growth. I think that's how it will be at least until we reach around $13k-15k MRR.

Basically I pay attention to what email providers all the bloggers and authors I know are using and reach out if they are using Aweber or MailChimp since those are the easiest platforms to switch people away from.

This results in a lot of new $150-250+/month accounts. Which increments revenue a lot more quickly than chasing $29/month hobbyists.

Unfortunately we've been getting a lot of “I'm interested, but lets talk in a month or two.” For our growth, we obviously want to move quickly, but everyone else is busy and switching email providers isn't the biggest thing on their list.

With that in mind we just need to be patient and diligent about following up. All things considered it's not that long of a sales cycle.

Being top of mind

I'm learning that it matters a lot to be top of mind for our target audience. Timing matters in all of these discussions. We need to contact have a conversation just as they are feeling the pain of their current provider, but before they've made the switch to another provider.

After someone has made the switch they aren't going to be interested in switching again for a long time. It's just how things work.

I got back to blogging more heavily in the last month and wrote a couple of posts to pitch ConvertKit to my audience on NathanBarry.com. If you're reading this, you'll probably enjoy those two posts as well:

They drove a few new accounts, but I'll work on promoting them more to hopefully get a bigger lift in May.

Each month I'd like to feature a few new ConvertKit customers. These are just a few of the 33 new customers from April, but I'm particularly excited about them since I use their products and read their writing.

You've already seen Baremetrics in action throughout this post. They create the awesome graphs and analytics we use to calculate all our metrics. They also write an awesome blog on growing a SaaS business, which you should read.

Leo Babauta writes Zen Habits, one of the most popular blogs on the planet. He switched to ConvertKit to give his readers a much cleaner, more minimalist subscription experience.

Dan is the founder of Realmac Software in the UK. He and his team created Clear, which is one of my favorite iOS apps of all time. He's also writing a book on App Store Marketing.

And to all of our customers, thank you for supporting us! It means a lot. We couldn't have built this product and company without you.