Book promotion on a budget: Use a DIY tour to promote your book

Over the past few years, I’ve hosted more than 150 book promotion events with readers in eight countries. There is no “author school” where one learns to do these things– it’s an entirely make-it-up-as-you-go process.

Traveling the world has certainly brought a lot of awareness and knowledge, but there’s no doubt that book promotion tours have changed my life too. It’s been incredibly fun and meaningful.

When I write blog posts and manuscripts, I think about the people I’ve met on tour, especially those who drive long distances to attend, bake cupcakes, or drag along friends. My newest book, Side Hustle, is a direct result of hearing so many people ask me about the concept on my last tour.

Because each event is different, I don’t get tired of them. Some are better than others, but there are very few “bad” gigs. I do sometimes grow weary of constantly shuffling from one place to another, a different city every day, all while worrying that everything is in order. And I also get behind on my other projects while touring, which creates a tension as I strive to make progress on more than one thing at once.

I should stress that any negative experiences on the tour itself are definitely the exception. After more than 150 events, I can say that 135 of them have been amazing, very good, or at least good.

Whether at bookstores or publishers, most people who work in publishing do so because they love books and want them to be read. As an author I also want my books to be read, and I want to be a good partner for everyone else in the business.

In this article I’ll share a few stories, highlights, and lessons learned from the past three years of coordinating and hosting book tour events. I hope something here will be helpful to anyone who hopes to reach more people with their message.

Here are a few things I’ve learned from all the different events.

A large number of people who come to the gigs have said that they’ve never been to a book talk before, which is great. I encourage readers to bring cupcakes and to talk to other people who show up. Sometimes they also bring muffins, brownies, or scones. In Nashville recently, some guy brought Mac & Cheese, and in Dallas a woman brought alcoholic popsicles.

I give a talk for 25 minutes or less, do another 25 minutes of Q&AA (Questions and Attempted Answers), and then we hang out. Wherever possible, I try to keep it conversational and informal.

For example, in Atlanta we had a New Orleans style marching band. In Detroit there was an African drum show and a food fair of local vendors, many of whom had started their businesses for less than $100. (A great testimonial for my book The $100 Startup!)

Co-hosts make all the difference.

If a few people are on the ground in any given city making things happen, we’ll have a much better experience than if it’s just me and a bookstore or co-working space.

I can draw a good group on my own, but we’ll have a better time if there are more people who aren’t familiar with my work. Good co-hosts can make a huge difference in this effort, and I’m grateful for the ones who go above and beyond in putting together a welcoming environment for all attendees.

On the first book tour I was trying to keep expenses low and stay as affordably as possible, which led to sleeping on couches or in budget motels far away from the venue. Lesson learned: I don’t stay in people’s homes these days, and I don’t stay in many Motel 6’s either.

After the gig these days, if I’m not traveling on to the next city the same evening, I go crash at a hotel. Since I’ve missed most of the working day due to travel, I usually spend the next two hours working online at the bar or in my room. I simply have to do my best to keep up– if I fall behind, I end up letting people down on various commitments.

You’ll get better through repetition.

While I’ve been touring over the past 10 days I’ve been shifting small things in the talks I give. I recently read an article about how small shifts in delivery can create different responses.

In a good talk, everything is there for a reason. Right now I think my current talk is 90% where I’d like it to be, but in a situation like this, the final 10% is everything. Therefore I keep working away and trying to improve.

I’m often asked about how book tours actually work. Here are some of those questions:

Who pays for book tours?

It depends. For the first book tour, I paid for everything– all flights, hotels, ground travel, meals, and everything else. I honestly don’t think my first publisher believed me when I said I was going to visit readers in 63 cities. They eventually came around to the idea, but only after saying, “You know we can’t pay for that, right?”

In the end it was fine, since I wanted to prove myself as an author. I believe that authors are responsible for the success of their books (more on this later) and I saw the first tour as an investment in my career. The whole tour cost somewhere in the neighborhood of $30,000.

For the second book, I changed publishers and my new partner was smart enough to understand that these tours are critical to our mutual success, especially in the beginning.

They were also smart enough to realize that The $100 Startup tour might go on for a long time– so we agreed to a deal where they paid for the first 20 stops (flights, hotels, ground travel), and I took care of things after that. It was essentially a good faith agreement, one that both of us were happy to make.

The $100 Startup then came out in different languages from at least 22 foreign publishers. Arrangements for in-country visits or tours vary considerably.

Finally, sometimes the translated book comes out somewhere, I never hear anything from the publisher, and I have no idea what happened. (Now that I think about it, this actually happens more often than not.)

Is it worth it?

In the first few weeks after a new book comes out, when everyone is watching the bestseller lists and you’re trying to start with a bang, it’s definitely worth it. I focus on major cities during that time, and we’ll sell a couple thousand books each week just through the actual book tour. I’m also usually doing radio or other media in many of the stops, and some of that has an effect as well.

Where it gets more interesting is after those first few weeks. By that point, a lot of fans already have the book– so I don’t sell a ton of copies in the later stops, at least not directly.

My royalty is approximately $3 per hardcover book, so if we sell 25 books at an event, I “make” $75 a year and a half later when royalty statements come in… and I’ve probably paid $1,000 on average to fly to that city and stay in a hotel. Whenever possible we don’t charge for the event itself, and I don’t ask for (or accept) donations.

However, the real answer is: THINK LONG-TERM. It’s all about the career, not the short-term fix. My goal is to build real relationships that will continue long beyond any one project. 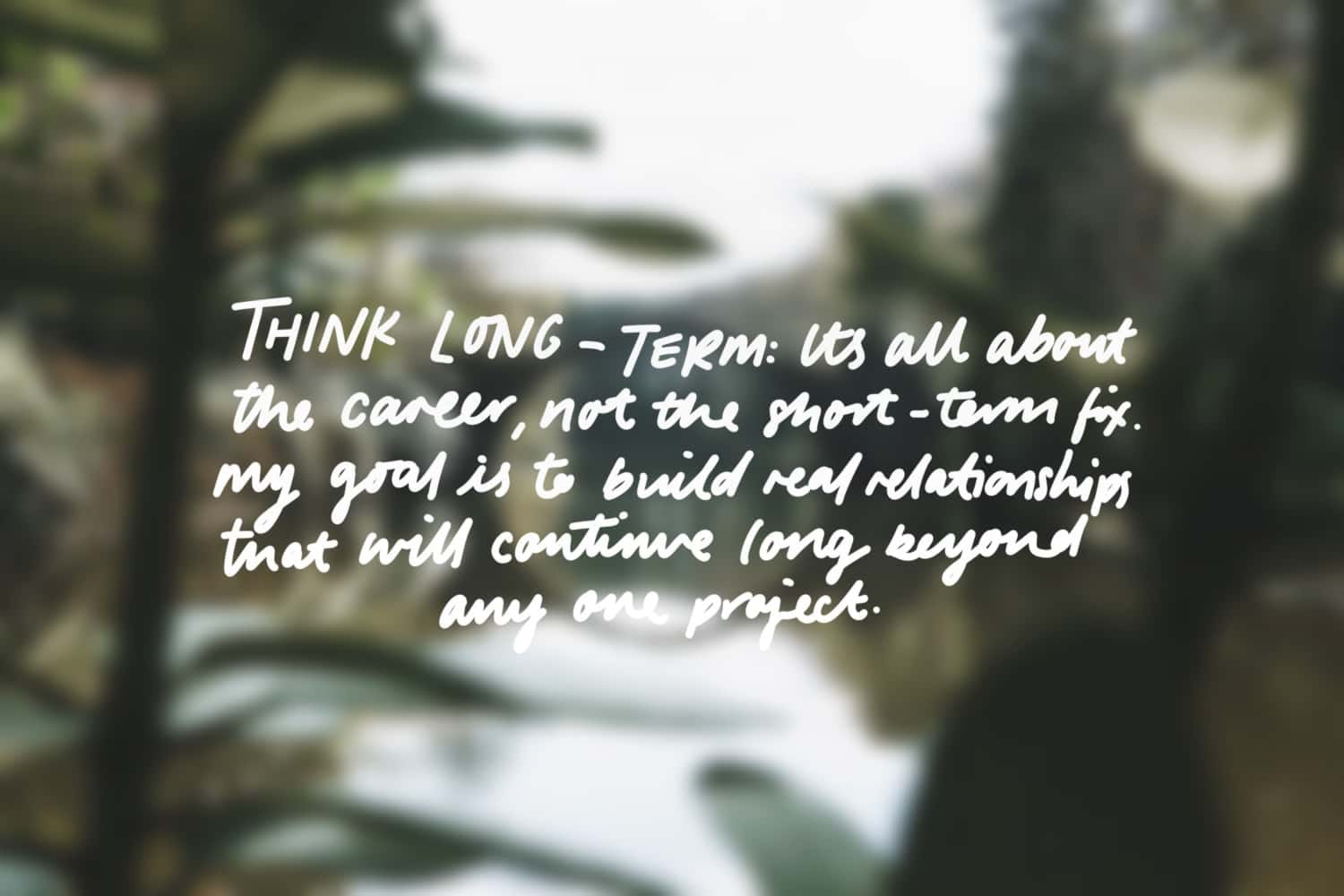 In addition to traditionally published books, I make a good living from the self-publishing work I do. One project relates to another, which is why you need an integrated, long-term focus.

Who is responsible for marketing?

I firmly believe that authors are always responsible for the outcome of their books. I will do anything and everything I can to ensure the book debuts well and (hopefully) goes on to sell for a long period of time. Anything the publisher does to help is a bonus. That said, these days I’ve actually had a great relationship with my publisher, and they’ve done quite a lot to help.

Side note: consider adopting a version of this perspective no matter what kind of work you do. When you’re responsible for the outcome, you know you’ll make it happen, and you won’t be disappointed if no one else helps.

What if you’re afraid of speaking?

Join the club. The only people I know who are completely unafraid of public speaking aren’t very good at it, because they’re overconfident. I’m nervous almost every night before a talk, even if I’ve done it seven nights in a row.

It gets better, though.

You improve through repetition and with the realization that most people in the audience want you to succeed. You gain confidence and improve in your ability to connect with people through presentations and Q&A.

The biggest lesson I learned about speaking was from Scott Berkun, who said something like: “Remember that the audience is on your side. They want you to succeed.” This perspective shift helped me a lot when I was getting started.*

*They’re on your side because they’ve come to the gig in the first place. They’re your fans, or at least they’re curious. Even if not, no one wants to hear a bad speaker … therefore they want you to do well.

What if no one shows up?

Having no one show up is the biggest fear of every author, bookstore, and publicist. It’s never happened to me but I came close once in New Brunswick. (I love most of Canada, but Fredericton was… interesting.)

The reason I have a signup process is to ensure that people will come– or at least, to ensure that they say they’ll come. The actual sign up-to-attendance ratio varies a bit from city to city, but it’s usually at least 40%. If I have 200 people on any given list, I can feel confident that 80 of them will actually show up.

Ready for your own DIY book tour?

Like everything else I do, my book tours are in a state of continuous improvement. I’m still learning what works best and what should be changed.

In a time when publishing is constantly being reinvented, the DIY book tour model has been good to me. If you’re hoping to reach more people with your own message, regardless of whether you’re an author or not, I hope that something in this post is helpful to you.

Chris is a writer, entrepreneur, and world traveler. His new book, Born for This, is all about how to find the work you were meant to do. His two previous books, The Happiness of Pursuit and The $100 Startup, were New York Times bestsellers and have sold hundreds of thousands of copies worldwide (thank you, readers). He also produces and hosts the World Domination Summit (WDS), a gathering of thousands of remarkable people that takes place each summer in Portland.

From start to finish: How to plan an in-person retreat your clients will love
< Previous Article

These emails are a MUST for your event marketing plan