7 mistakes creators make from a creator who’s made them

Take Yourself Pro The Future Belongs to Creators

The Future Belongs to Creators
5 min read
In this Article

There is a plethora of advice for creators already out there and it feels like everything has already been said about how to create and sell.

But what about what not to do when creating and selling?

In episode #151 of The Future Belongs to Creators, we steer clear of the traditional tales of success. Instead, we have ConvertKit’s Support Operations Lead, Ben Schoeffler, here to advise on how to avoid seven of the top mistakes new creators make when selling a product.

A seasoned creator himself, Ben has launched dozens of digital products, created a podcast with half a million downloads, and has a long history of profiting from side hustles.

Let’s see how we can avoid some of the mistakes he made along the way.

Unfortunately, establishing the need for a product before you create the product is common advice dispensed by thought leaders and creators. Though this strategy has some genuine benefits, Ben learned this first mistake when he pre-sold an online course.

One or two months of course-creating turned into six months. What was supposed to be a side hustle required more of Ben’s time than anticipated. In the end, there was a finished product, but he wasn’t satisfied with the quality of the course content. Dissatisfaction with the content meant Ben would not ultimately resell the course as initially planned.

When a creator isn’t confident in the product quality, the likelihood of others buying it is also low.

It’s easy for a creator to charge a low price to ensure their product sells, especially early on when it launches. Ben's advice, however, is to charge more for your product than you think it’s worth. In fact, he says you should double the cost you want to charge for your product.

Charging more for your product can denote higher quality to the customer, thus making it an attractive product compared to competitors.

Deep Sleep by Ben was originally priced at $300. While most reviews were positive, there were some complaints about the price. But complaints about pricing are to be expected, no matter what your product costs. Whether it’s $5 or $50 or $500, someone will always tell you it’s too expensive.

Your price communicates the quality of your product.

Don’t build for the masses

You may think that creating something trendy that many people want leads to a widely adopted product. Not necessarily. In fact, some of the most successful projects Ben created were for one person rather than many.

For example, when Ben made videos on his YouTube channel, he would get around 1,000-5,000 views. But when a client of Ben's asked for a specific video, something Ben didn’t think would be a hit with anyone other than his client, it got 200,000 views. Ben did the same thing for another individual, and this video had 40,000 views. In short, if one specific person is looking for a product, there's a chance that other people are too.

Don’t try to sell without an audience

Create a product → Release it → And then get no feedback at all.

Not getting any feedback is a terrible feeling every creator wants to avoid. The creator economy relies heavily on the audience, a group of people who already resonate with your opinions and views.

Trying to sell without an audience is slow and expensive. You are either shouting in the void or spending on Facebook Ads. Ben did the same, hoping to “make two dollars for every one dollar he spent.” But this strategy didn’t play out as he hoped. Later on, with the podcast audience, it was easier for him to get new products in front of people.

Don’t assume an audience will always translate to customers

Assuming your audiences are the right target customer for your latest product is as unwise as trying to sell without an audience. Some products may not align with what your audience wants.

Even while Ben had a growing podcast audience, he still had products he struggled to sell. Your audience is one piece of your product release strategy.

You have to do the work to figure out what products your audience wants.

There's little downside to keeping your day job while building a side hustle. Side projects are usually unstable in the returns they provide—your sales may skyrocket one month while barely having sales in the upcoming one. Unless you have a plan for sustaining the profits from your side hustle, it’s risky to quit your job.

Ben created the podcast and many of his products while working a full-time job. He agrees that it might be hard to manage time but it is possible.

In this economy, it's better to have a lot of work instead of jumping ship for an unsustainable project.

Don’t limit yourself to a single business model

Creators tend to limit themselves to a single business model—often it is monetizing their content. While it’s beneficial for most businesses or products to have content, the business model for being a content creator is tougher than most realize.

Ben recommends exploring other business models while setting out for side hustles. For example, a fitness tracking app instead of fitness tutorials. You can create value without worrying about monetizing your content.

These were all unfortunate lessons Ben had to learn on the way to losing time and money. He knows he would've been far better off if he had known these lessons before. But creating is iterating, and luckily Ben was gracious enough to share these invaluable lessons with us. 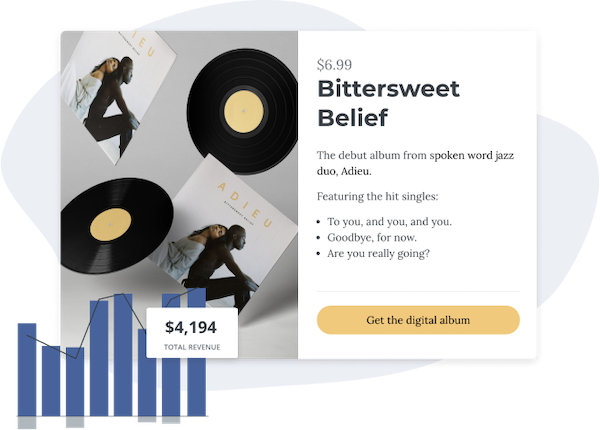 Make a living selling your work

ConvertKit Commerce makes it easy for creators to get paid for their work and earn a living online without needing a complicated ecommerce website.

Newsflash! Your attention didn’t collapse. It was stolen (and what to do about it).